We still have people arguing about whether Global Warming is man-made or it’s just natural. While almost all climatologist and most of the scientist agreed that it’s man-made, there is still a big discussion about this topic. I’ll try to put their claims on table and by showing the facts about climate change, I’ll compare them to see which side makes more sense.

Global Warming Skeptics: Global Warming is not man-made and it’s just natural. There is no evidence that carbon dioxide is changing the climate. Climate change is caused by the sun, so we can’t do anything about it.
The Scientific Consensus: CO2 is a very important greenhouse gas and humans emit a huge amont of CO2. This is not the only thing that causes a climate change but it has an important role in the Global Warming that we’re experiencing right now.

– Global Warming is caused by the sun

Eccentricity of Earth’s orbit has a period of 413,000 years and the eccentricity changes between 0.005 and 0.058. Low eccentricity means more circular and high eccentricity means more elliptical. Angle of the Earth’s axial tilt changes between 22.1° and 24.5°. This has very important effects on our climate but, it has a period of 41000 year. Axial precession is also a very important factor. For example, right now the Sun is closer the us when Northern Hemisphere experiences winter but, in half way of a period we will have the Sun closer to us while Northern Hemisphere is experiencing summer and axial tilt has a 26000 years period. (It’s also important to know that when we’re closest the Sun, the distance is 147,000,000 km and when we’re furthest from the Sun, the distance is 152,000,000 km)¹

Greenhouse Gasses: Many chemical compounds present in Earth’s atmosphere behave as ‘greenhouse gases’. These are gases which allow direct sunlight (relative shortwave energy) to reach the Earth’s surface unimpeded. As the shortwave energy (that in the visible and ultraviolet portion of the spectra) heats the surface, longer-wave (infrared) energy (heat) is reradiated to the atmosphere. Greenhouse gases absorb this energy, thereby allowing less heat to escape back to space, and ‘trapping’ it in the lower atmosphere. Water vapor and carbon dioxide are the most important greenhouse gasses.

Water Vapor: As a greenhouse gas, the higher concentration of water vapor is then able to absorb more thermal IR energy radiated from the Earth, thus further warming the atmosphere. The warmer atmosphere can then hold more water vapor and so on and so on. This is referred to as a ‘positive feedback loop’. However, huge scientific uncertainty exists in defining the extent and importance of this feedback loop. As water vapor increases in the atmosphere, more of it will eventually also condense into clouds, which are more able to reflect incoming solar radiation (thus allowing less energy to reach the Earth’s surface and heat it up).

Carbon Dioxide: The natural production and absorption of carbon dioxide (CO2) is achieved through the terrestrial biosphere and the ocean. However, humankind has altered the natural carbon cycle by burning coal, oil, natural gas and wood and since the industrial revolution began in the mid 1700s, each of these activities has increased in scale and distribution. Prior to the industrial revolution, concentrations were fairly stable at 280ppm. Today, they are around 370ppm, an increase of well over 30 percent.²

I wrote about the facts right above, so I might be able to compare the sides fairer.

Global Warming is caused by the sun

Either this or CO2 emissions from humans are a lot less than natural sources especially less than volcanoes, is another big thing that you can hear from the deniers. To get rid of the volcanoes speculation first,  I suggest you to read this article http://volcanoes.usgs.gov/hazards/gas/climate.php To give you a preview, I quote: “Do the Earth’s volcanoes emit more CO2 than human activities? Research findings indicate that the answer to this frequently asked question is a clear and unequivocal, “No.” Human activities, responsible for some 36,300 million metric tons of CO2 emissions in 2008 [Le Quéré et al., 2009], release at least a hundred times more CO2 annually than all the world’s degassing subaerial and submarine volcanoes (Gerlach, 2010).”

Some people say, CO2 effect is weak or even it’s lagging behind temperature for up to 1000 years, so it can’t be the reason of global warming. To understand this, we need to understand the Milankovitch Cycles which I tried to explain above.

The combined effect of these orbital cycles cause long term changes in the amount of sunlight hitting the earth at different seasons, particularly at high latitudes. For example, around 18,000 years ago, there was an increase in the amount of sunlight hitting the Southern Hemisphere during the southern spring. This lead to retreating Antarctic sea ice and melting glaciers in the Southern Hemisphere.(Shemesh 2002). The ice loss had a positive feedback effect with less ice reflecting sunlight back into space (decreased albedo). This enhanced the warming.

As the Southern Ocean warms, the solubility of CO2 in water falls (Martin 2005). This causes the oceans to give up more CO2, emitting it into the atmosphere. The exact mechanism of how the deep ocean gives up its CO2 is not fully understood but believed to be related to vertical ocean mixing (Toggweiler 1999). The process takes around 800 to 1000 years, so CO2 levels are observed to rise around 1000 years after the initial warming (Monnin 2001, Mudelsee 2001).³

When it comes to water vapor, everyone knows that it’s a positive feedback cycle. Persistance is one of the most important factor here. Yes, water vapor might be the most important contributor to the greenhouse effect, but it persists in the atmosphere just for a few days. CO2 on the other hand, slowly builds up and contributes to global warming, more and more. Since water vapor is a positive feedback and adding CO2 to the atmosphere makes the planet hotter, therefore there will be more water vapor which will make the planet even hotter. 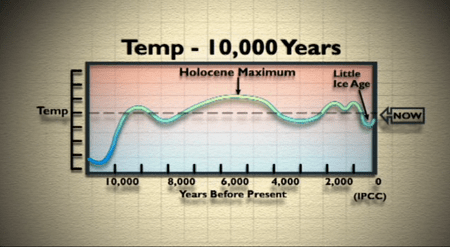 This graphic is a screenshot from The Great Global Warming Swindle. They say the climate is always changing and it’s doing it without any help from humans. If you watched it, you might remember that they talk about the Little Ice Age, Medieval Warm Period and Holocene Maximum. Ian Clark talks about Holocene Maximum and he says that it was hotter than it’s today for 3000 years and polar bears survived this period since they are adaptable. So they shouldn’t have any problem from the climate change we have now.

I took this screenshot to show, how long it took the temperature to go to maximum in Holocene Maximum. It took almost two and a half thousand years. It’s obviously slow and they compare it to the temperature rise we have right now. Here is another graph which shows the temperature change in last 2000 years. I think after we see how rapidly temperature is rising, we won’t need further explanation. 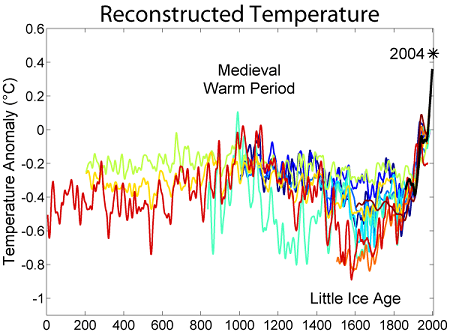 Unfortunately, there is always going to be people who creates conspiracy theories. About Global Warming, people say lots of different things, I tried to choose the most common and effective ones and tried to explain them. When you read the arguments or watch the videos they make who call themselves Global Warming Skeptics, you’ll realize that they’re not skeptics but deniers. You’ll see them fabricating data, trying to manipulate people with false claims and doing things like that.

Best way to deal with this is to remain skeptical, in this case be skeptical of skeptics. Always look for further data. Scientific consensus will show you the right way about a science topic almost everytime. Don’t believe what I just wrote here, I might be wrong. Look for further information, read more. I’ll repeat the important part, be skeptical.

Get my newsletter on design & development